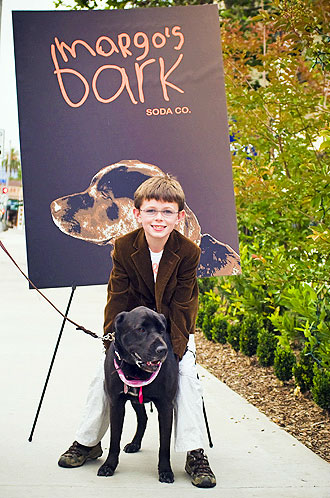 I am a black lab-pit bull mix and the spokesdog for Margo's Bark Root Beer. I also belong to the Youd family, and they belong to me. But it wasn't that way at first. When I was just a few weeks old, I was abandoned in a parking lot in Long Beach, before I was picked up by my foster parents and soon thereafter adopted by the Youds. I'm one of the lucky ones. There are far more dogs who wind up in city shelters, which is why the Youd family and I got into the root beer business. Here's how it happened.

I am in charge of a seven year old boy named Oscar Youd. For his school science fair at St. James School in Los Angeles, Oscar (with help from his mom Jessica and dad Tim) made home made root beer. The object of the experiment was to create carbonation in the soda, which occurs when yeast acts on sugar. As an aside, I can tell you that when a dog acts on sugar, she gets crazy and emits a different kind of gas. But that's another story.

Beyond the science of it, it was a great deal of fun. Oscar decided to name the root beer Margo's Bark, after the family dog, which is me. I patiently posed for my picture and together we designed labels for the bottles, and today's design reflects those original home made efforts.

At the science fair, I am told we served close to 300 people. I remain confused as to why I was not allowed to attend – I'm actually really into science. Evidently, my family heard many times over that we should be selling the stuff. And so, in the aftermath we actually started talking (and barking) about doing just that. And because the plight of shelter animals is something we have an ongoing interest in, we determined that making and selling Margo's Bark for the benefit of shelter dogs would be a wonderful adventure for us.

Once we decided on this plan, we became obsessed with root beer. They took a trip (without me!) to Galco's Old World Grocery in east LA, and picked up just about every brand of root beer that gets made in the US today. And for many months they have been sampling these to zero in on exactly what makes a root beer great. They have toured bottling plants and micro-breweries, and they have worked with flavorists to make what we all think is one great tasting beverage.

So twist off the cap of a nice cold Margo's Bark and drink a bite! All profits go to helping the cause of shelter and rescue dogs. And believe me, they need all the help they can get.